Showing posts from July, 2011
Show all

The first batch of Gopher frogs have been released!!! 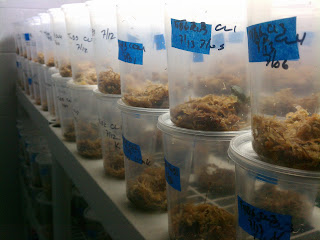 The second batch of Gopher froglets. Once we get 200 or so,  we make the journey to South GA where they are released back into the wild. Last week, 219 of our head-started Gopher frogs (Lithobates capito) have been released into suitable Southern GA habitat as newly metamorphosed froglets! The Atlanta Botanical Garden, in conjunction with many other concerned and dedicated institutions in Georgia have, for several years, been trying to increase population numbers of this endangered frog species. So far, over 700 froglets have been released with 100s more tadpoles still developing. For more information, please click the Gopher frog link at the top of our blog, or come by the Garden to see our Gopher frog tadpole exhibit. We have lots of tadpoles in various stages of development. Since the initial release, many more frogs have emerged from our rearing tanks, where they will be counted weighed and measured before being released.
Post a Comment
Location: Atlanta Botanical Garden, 1345 Piedmont Ave NE, Atlanta, GA 30309-3366, USA
Read more

The Colombia exhibit's renovation has inspired some new behaviors 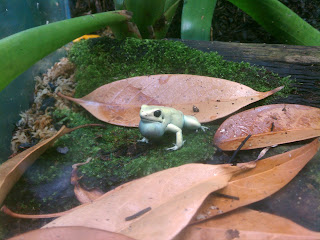 The 'mint' morph of the Poison frog  Phyllobates terribilis , singing his heart out in his new  habitat Recently, our ' Colombia's Terrible Trio ' exhibit has had some remodeling. New plants, substrate and leaf litter has made the bold frogs even easier to view. These are some of the oldest frogs we have in our collection (besides our Horned frog which is over 30 now!) Some of these bright yellow frogs are close to 15 years old ... Since I have been here (about a year and a half) I have regularly seen the males calling, especially after their morning misting, but it seems their new 'digs' have inspired even more breeding behaviors, including egg deposition! Several times now, I have seen pairs of both species of poison frogs courting in front of the large palm frond lying across the bottom of the enclosure. ... Come and see for yourself!
Post a Comment
Read more 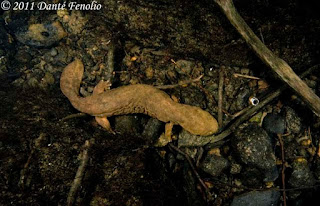 One of the member of our frog conservation team, Danté Fenolio, is also quite a photography enthusiast. Cryptobranchus , the Hellbender Sternotherus minor , Loggerhead musk turtle Necturus , the Mudpuppy Recently, he has acquired some underwater photography equipment and what better way to test it out than to try and get photographs of the elusive Hellbender . Hellbenders are notoriously difficult to photograph due to their large size and secretive habits, preferring to live under large, relatively un-liftable rocks along fast flowing river bottoms. Photographing Hellbenders is also at minimum a two person job. One to lift the aforementioned huge rocks and one to stand ready for taking photos. Then there is the problem of how to remain still enough to take a photograph while the river's current is naturally trying to drag you downstream. Obviously, this requires great dedication and skill—but as you can see from the photos, quite worth it!
Post a Comment
Read more
More posts