Showing posts from December, 2011
Show all

Inside the New Exhibits | part 1 — plants 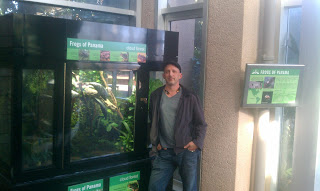 The original Frogs of Panama exhibit One of the first assignments in my new role was to design and coordinate the opening of three new frog exhibits for the Fuqua Conservatory lobby. The stand and the 3 aquaria were already being built to replace the current Frogs of the Panama Cloud Forest exhibit. This enormous terrarium (pictured with me, above) was one of the original orchid exhibits, and was showing signs it could not contain a miniature cloud forest much longer. I was delighted to hear that Robert Hill (my predecessor) and Mike Wenzel (plant records guru) had already made some headway into finding plants that would not only be accurate to the regions of which they were depicting, but might also feature plants of focus in our conservatory and conservation collections. We decided the regions we would focus on for the new exhibits would be Costa Rica , the Amazon basin, and of course a downscaled version of our previous Panama exhibit. To be honest, in previous terrariu
Post a Comment
Read more

Yesterday in the Colombia exhibit! 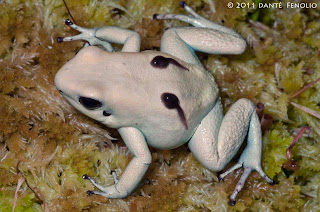 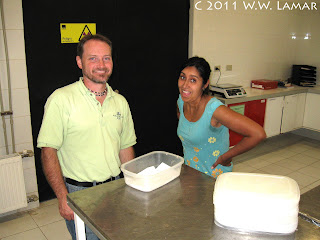 Lead veterinarian for the National Zoo of Chile in Santiago, Marcela Tirado , and amphibian biologist for the Atlanta Botanical Garden, Danté Fenolio , prepare to process an incoming batch of live frogs going into quarantine. Skin swabs are taken from newly collected frogs as they are entered into the quarantine process at the National Zoo of Chile. Skin swabs are non-invasive and screen for a potentially lethal fungal pathogen, amphibian chytrid fungus. This Darwin's Frog ( Rhinoderma darwinii ) is tolerating a brief skin swab. Newly collected and incoming frogs pass through a quarantine process that lasts a little longer than a week.  They live in plastic boxes throughout the quarantine window.  Frog boxes are changed for sterile boxes and are given a daily soak in a solution that kills amphibian chytrid fungus.  The procedures performed ensure that frogs entering the captive breeding facility are free of amphibian chytrid fungus.
Post a Comment
Read more
More posts