Showing posts from January, 2013
Show all

Amphibian Volunteer Outing - Behind the Scenes at Zoo Atlanta! 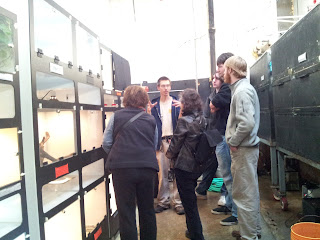 Last week, I took the amazing volunteers in the amphibian conservation program to Zoo Atlanta , where Robert Hill (former Garden amphibian staff) gave us all an incredible behind-the-scenes tour of the reptile house. It was fantastic! Robert discussing some of the projects he has going on at the zoo Anthony behaved himself in the room full of things that would love to bite him The least blurry of all of Anthony's shots. (from the left: Ryan Schultz, Stephen Mottram, Anita Wallace,  Mark Mandica, Stefanie Hanagud, Robert Hill and Kirill Chernoff)
Post a Comment
Location: Zoo Atlanta, 800 Cherokee Avenue Southeast, Atlanta, GA 30315, USA
Read more

Recent research on chytrid fungus: Crayfish can also be vectors

Rabb's Fringe-limbed tree frog to be featured in National Geographic 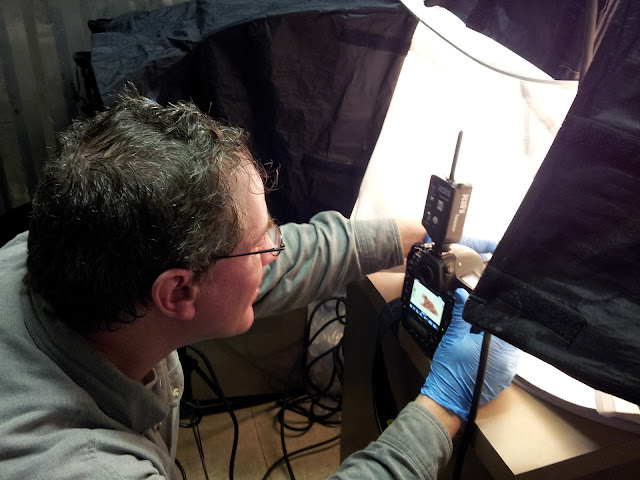 This week Joel Sartore , photographer for National Geographic , was in the Garden's frogPOD photographing Rabb's Fringe-limbed tree frog ( Ecnomiohyla rabborum ) . Last year, amphibian biologists concluded that this Panamanian frog is likely to be extinct in the wild, leaving the male in our collection as the last known animal on earth. Joel Sartore, pictured here photographing  Ecnomiohyla rabborum , has photographed more than 2,600 endangered species for his Photo Ark,  aimed at preserving—at the very least—the memory of the earth's biodiversity. A profile of the frog will be featured in an upcoming issue of National Geographic magazine. We will keep you posted! The frog was out of his enclosure for only a moment to minimize stress on this important animal. The Rabb's Fringe-limbed tree frog (and all the frogs in the Garden's frogPOD) was collected from Panama in 2005 ahead of the arrival of the 'amphibian chytrid' fungus,  Batrachochytrium
Post a Comment
Read more 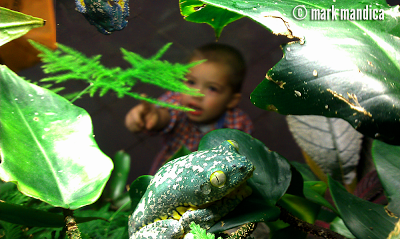 The Fringed leaf frog, Cruziohyla craspedopus is one of our most popular and captivating exhibit animals In a long-term collaboration with @Mark Pepper and Understory Enterprises, the amphibian team at the Atlanta Botanical Garden has bred the Amazonian Fringe-limbed Leaf Frog ( Cruziohyla craspedopus ). I’m proud of my amphibian team for sticking with this project through countless difficult twists and turns. Nice to get results! - Dante Fenolio Fringed leaf frogs in amplexus in the rainchamber The eggs of Cruziohyla craspedopus are blue, which is not unusual with phyllomedusine frogs.  Here you can see development beginning. A few days later, the embryos, with gill filaments are clearly visible Just after hatching. Notice the large fin fold. Pigmentation has started. The robust tadpoles are much darker than they were at hatching.
2 comments
Location: Atlanta Botanical Garden, Atlanta, GA 30309, USA
Read more
More posts