Showing posts from January, 2020
Show all

For #FrogFriday I am sharing my true frog love.

I have been more or less obsessed with 𝑷𝒊𝒑𝒂 𝒑𝒊𝒑𝒂 since I first mistook one for a piece of wood.⁠ ⁠ Huge - yet flat as a Cracker Barrel pancake - no tongue or teeth - babies pop grotesquely out of momma's back - tiny eyes - star-shaped lobes on the finger tips for detecting prey - and are able to generate powerful suction to draw in prey. What more could you want from a #frog?⁠ ⁠ ⁠ ⁠ #Frog #Frogs #Frogger #Froggy #FrogsOfInstagram #LeafFrog #LeafFrogs #TreeFrog #TreeFrogs #FrogLife #Crypsis #Mimicry #AmphibiousAF #AmphibianFound #FrogsNeedOurHelp
Post a Comment
Read more

Smallwood's Anole, 𝑨𝒏𝒐𝒍𝒊𝒔 𝒔𝒎𝒂𝒍𝒍𝒘𝒐𝒐𝒅𝒊⁠ ⁠ A gorgeous species from Southeastern Cuba. They really aren't as ferocious as it looks in this picture. They tend to be much nicer than their 𝑨. 𝒆𝒒𝒖𝒆𝒔𝒕𝒓𝒊𝒔 cousin.⁠ ⁠ #Fierce #Anole #Lizard #Lizards

Mole Salamander, 𝑨𝒎𝒃𝒚𝒔𝒕𝒐𝒎𝒂 𝒕𝒂𝒍𝒑𝒐𝒊𝒅𝒆𝒖𝒎⁠ ⁠ I just love these goofy chonks. This individual was reared from larvae collected in a South Georgia ephemeral wetland. This species also commonly delays metamorphosis through a process called #progenesis and progenics can actually reproduce as larvae.⁠ ⁠ It'd be nice to put off growing up until we were ready.⁠ ⁠ #Paedomorphosis #Salamander #Salamanders #SalamandersOfInstagram #Ambystoma 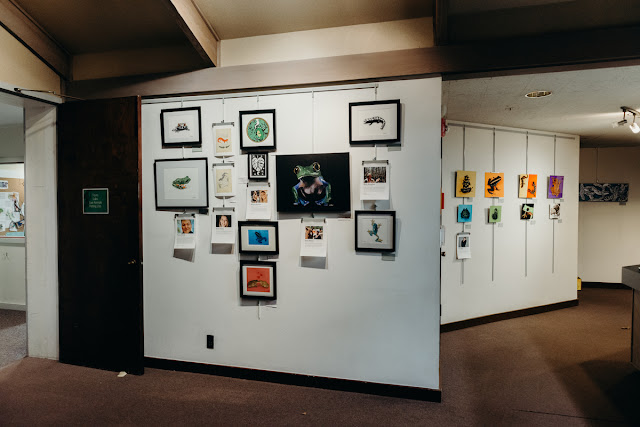 The first Friday in December each year, we have opened the doors of the Amphibian Foundation (which is generally closed tot he public), and invited our partners to help us celebrate the wonderful diversity of reptiles and amphibians — often overlooked groups of animals — both groups are in great conservation concern.

The last couple of years hundreds of people have come help us celebrate! What a wonderful experience and we are so grateful the community has welcomed us, and wants to celebrate these animals with us.

— All photos by Tess Yaney — In the lobby:

Stuck in a Peanut Butter Jar! Snapping Turtle is rescued by AF staff and volunteers 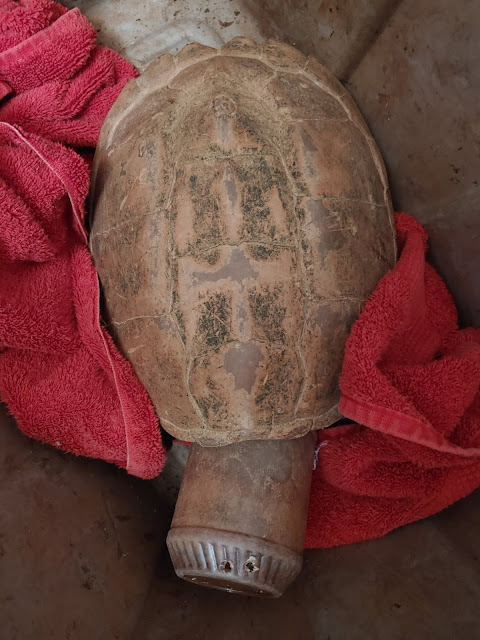 Yesterday, we received a troubling call from Carola, an Education & Outreach Volunteer at the Amphibian Foundation. She and her family found an adult Snapping Turtle (Chelydra serpentina) with its head stuck in a peanut butter jar.
Having a lot of experience with Snapping Turtles — this is something I had never heard of! What could possibly motivate an adult Snapper to jam its head in a peanut butter jar to the point where it couldn't get it out!? Did it want some peanut butter? Did some other tasty morsel crawl in there?
Nevertheless, Carola and her son's Patrick and Alan were concerned, so they contacted us. Anthony and I sprung into action. Though we had gone on many Snapping Turtle rescues, this was an unprecedented mission. What might we need to remove the Snapper's heard from the jar? I brought an oil filter wrench (maybe to grip the jar), and a small hammer (in case we needed to bust the jar). Turns out, we needed neither of those things.

Phenomenal Audio Recording of Gopher Frogs this Season in Alabama

#FWA⁠ ⁠ The teaching collection at #AF includes some rather grouchy species, like this African Bullfrog⁠ ⁠ 𝙋𝙮𝙭𝙞𝙘𝙚𝙥𝙝𝙖𝙡𝙪𝙨 𝙖𝙙𝙨𝙥𝙚𝙧𝙨𝙪𝙨⁠ ⁠ I have always been enamored by frogs that think they can kick my a$$, or at least would like to.

𝙂𝙖𝙨𝙩𝙧𝙤𝙩𝙝𝙚𝙘𝙖 𝙘𝙤𝙧𝙣𝙪𝙩𝙖⁠ ⁠ The #CriticallyEndangered Eyelash Marsupial Frog from Panama.⁠ ⁠ This species and many others were impacted by the infectious #chytrid fungus in the early-mid 2000's and were a target of the rescue mission led by #ZooAtlanta #ABG #EVACC and others.⁠ ⁠ #Frog #Frogs #Frogger #Froggy #FrogsOfInstagram #TreeFrog #TreeFrogs #FrogLife #Crypsis #AmphibiousAF #AmphibianFound #FrogsNeedOurHelp

Spring semester of #MasterHerpetologist starts this Saturday!⁠ ⁠ Join me, Chris Jenkins (#Orianne), Dan Sollenberger (#GADNR), and Grover Brown (U of S Miss) for a deep dive into the world of amphibians and reptiles.⁠ ⁠ Course and field work⁠ ⁠ masterherper.amphibianfoundation.org

𝑨𝒎𝒃𝒚𝒔𝒕𝒐𝒎𝒂 𝒕𝒊𝒈𝒓𝒊𝒏𝒖𝒎⁠ ⁠ The Tiger Salamander (though this one looks more like a Spotted Salamander than most)⁠ ⁠ This animal was reared from larva collected in an ephemeral wetland in Eastern Georgia (Liberty County). It is part of the Foundation's captive propagation program focusing on imperiled species from the southeastern US. Tiger Salamanders have been added to the state's Wildlife Action Plan.⁠ ⁠ #Salamander #Salamanders #AmphibiousAF⁠

This particular topic has come up a lot recently, and one of our visitors beautifully photographed a heron eating a rather large bullfrog out of the lily pond in the Children's Garden. It was a graphic interaction, but demonstrates how vital amphibians are in food webs and one of the reasons we use to illustrate how important it is to keep amphibians around. Almost everything eats them, or their tadpoles, or their eggs ... or all three.  Many animals eat frogs exclusively (including some frog species!), and the herons at the Garden obviously love them. I have seen ducks eating tadpoles quite rapidly. In fact, my amphibian class last summer quantified how quickly different aquatic birds could consume tadpoles of diff…
Read more

The last known Rabbs’ Fringe-limbed Tree Frog has passed away in the Atlanta Botanical Garden’s frogPOD, where he has lived since 2008. He was collected as part of the Panamanian frog rescue mission in 2005, set forth by ABG and Zoo Atlanta to save frogs being decimated by chytrid fungus. I had the honor of working with him for almost 7 years, and in that time his sad story of being the very last of his kind had, in a powerfully sad way, made him an ‘ambassador&#39; for amphibian conservation and awareness. Almost 40% of the world’s amphibian populations are documented as in decline, or already extinct. That means that this frog - who my son nicknamed ‘Toughie’ when he was 2 years old - is unfortunately not entirely unique in his situation. There are other species out there, blinking out before we even have a chance to recognize what was happening, let alone reverse it.

Questions About Snakes? DNR Has Answers FORSYTH, Ga. (4/27/2017) From spring through summer, calls and emails about snakes are a given at Georgia Department of Natural Resources offices. Yet most of those contacts involve only two questions: What species is this and what do I do with it? “Only every once in a while, is it a venomous snake,” said John Jensen, a senior wildlife biologist with DNR’s Nongame Conservation Section and co-author of “Amphibians and Reptiles of Georgia. ”Whether it’s a venomous snake is, of course, the concern or outright fear underlying most of the questions. Chances are it’s not, Jensen said. Only six of the 46 species native to Georgia are venomous and only one – the copperhead – usually thrives in suburban areas, where the majority of Georgians live. What to do, then, if you spot a snake? Try to identify it from a distance. Resources such as www.georgiawildlife.com/GeorgiaSnakes, which includes DNR’s “Venomous Snakes of Georgia” brochure, can help.Do not t…
Read more

Frogs are among the most diverse groups of vertebrates. They occur globally from the tropics to the sub-arctic regions, and in just about every conceivable habitat, one can find a frog species that has specialized to live there. Despite this diversity, it is generally easy to tell a frog from any other type of animal. Thanks, in part, to the absence of a tail like most other critters.

Today, we are featuring two species which possess unique, prominent physical attributes. First, and one of the author's favorites is the Phantasmal poison frog | Epipidobates tricolor, which has been living, breeding, singing and hopping around the Fuqua Conservatory since 1995. Most poison frogs (family: dendrobatidae) have brilliant colors, which almost make them look fake. This trait is described as aposematic colo…
Read more

Yesterday was the opening of our new 'Liquid Landscapes' exhibits throughout the Fuqua Conservatory and Orchid Center. Lots of visitors crowded the garden and we had about 80 people attend our Saturday frog feeding!

Phyllobates terribilis, the Terrible poison frog. Named as such because it is one of the few frogs lethal to humans (in the wild)
Dendrobates tinctorius, the Sipaliwini morph. Frogs of this species vary tremendously in color, with differing amounts of blues, blacks, whites, and yellows depending on where in South America their home is. The different variations are often called 'morphs' which are separated geographically.
The yellow morph of Phyllobates terribilis. Frog…
Read more

This year, USFWS joined GA DNR, UGA, Zoo Atlanta and the Amphibian Foundation in a state-wide project to increase population numbers of Georgia's rarest frog — The Gopher Frog. The fish hatchery at Warm Springs, and it's exceptional staff of biologists were excited to use their incredible facilities to rear amphibians. Historically, they have been focused on other aquatic vertebrates (fish) and invertebrates (muscles). The service has done an amazing job this year and we are excited to partner with them on another amphibian conservation project.  With USFWS covering assisted-metamorphosis for the species, the Amphibian Foundation and Zoo Atlanta are developing a program for the captive breeding of the species. The images below were taken by Carlos Echevarria, the Hatchery Manager at Warm Springs.