- August 14, 2011
Frogs are among the most diverse groups of vertebrates. They occur globally from the tropics to the sub-arctic regions, and in just about every conceivable habitat, one can find a frog species that has specialized to live there. Despite this diversity, it is generally easy to tell a frog from any other type of animal. Thanks, in part, to the absence of a tail like most other critters.

Today, we are featuring two species which possess unique, prominent physical attributes. First, and one of the author's favorites is the Phantasmal poison frog | Epipidobates tricolor, which has been living, breeding, singing and hopping around the Fuqua Conservatory since 1995. Most poison frogs (family: dendrobatidae) have brilliant colors, which almost make them look fake. This trait is described as aposematic coloration, a terms that means the bold colors serve as warnings to potential predators. In the wild, many of these frogs contain enough toxin in the granular glands of their skin to disable or kill would-be predators. Most poison frogs are not lethal to humans, but many of them could at least ruin your day.

Some poison frogs, like the Phantasmal poison frogs lay their eggs terrestrially, where the male parent guards the eggs until they hatch. After the eggs hatch, he approaches the tadpoles, which then wiggle up his back. Once all the tadpoles are in place, he transports them to a puddle of his choosing (see picture). That is quite a commitment for a frog, as most species abandon the eggs immediately after fertilization and leave them to develop on their own. Once deposited into the water, the male has concluded his responsibilities until next time.


The second species is a Glass frog | Cochranella granulosa (family: centrolenidae), which is not currently on display, but we are working with in one of our frog labs. When you look at the picture, you can see why they are called glass frogs—the skin on their ventral surface is transparent, allowing you to look right through the frog. I am not familiar with any theories suggesting why their skin is transparent, but it sure is easy to tell if they have eaten anything recently.
behavior centrolenidae Cochranella granulosa conservatory dendrobatidae Epipedobates tricolor general frog biology

Popular posts from this blog

After 11 years, and over a quarter million reads, we are moving the Frog Blog! 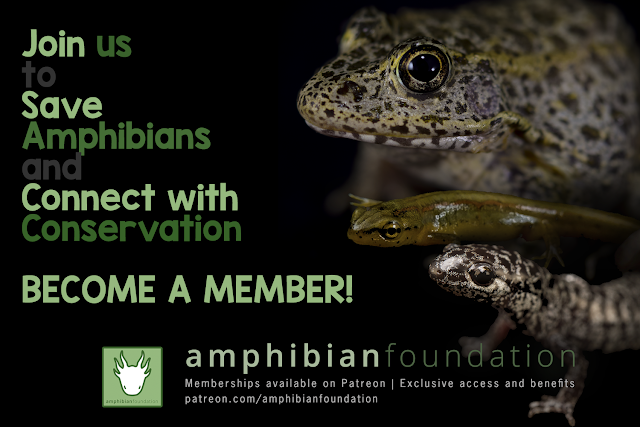 Our new Patreon promo image featuring the AF 'Power Team' of Gopher Frog, Striped Newt, and Flatwoods Salamander Don't worry, we will still be publishing regularly on amphibians, amphibian conservation, the Amphibian Foundation's programs, and all things slimy! We are simply moving our platform to Patreon , where our membership program lives. This will consolidate our messaging in one place, provide more opportunities to connect with us & get involved, and encourage our readers to get further involved as members. Most articles will still be accessible whether you sign up or not, though we hope you will join us at a level that works for you. In these trying times, our conservation initiatives rely on member support more than ever, and we couldn't have come this far without our local, regional, and global members! Our Patreon program also provides opportunities to join at the Partner Level , for those that would like to get deeper involved in conservation
Read more

This year, USFWS joined GA DNR, UGA, Zoo Atlanta and the Amphibian Foundation in a state-wide project to increase population numbers of Georgia's rarest frog — The Gopher Frog. The fish hatchery at Warm Springs, and it's exceptional staff of biologists were excited to use their incredible facilities to rear amphibians. Historically, they have been focused on other aquatic vertebrates (fish) and invertebrates (muscles). The service has done an amazing job this year and we are excited to partner with them on another amphibian conservation project.  With USFWS covering assisted-metamorphosis for the species, the Amphibian Foundation and Zoo Atlanta are developing a program for the captive breeding of the species. The images below were taken by Carlos Echevarria, the Hatchery Manager at Warm Springs. USFWS Biologists checking the development of Gopher Frog larvae at the Warm Spring facility Over 700 Gopher Frogs were reared through the assisted metamorphosis program this
Read more