Showing posts from July, 2013
Show all

Our Rabb's Fringe-limbed treefrog featured on Channel 11 News, as well as Leslie and Jenny!

- July 31, 2013
ATLANTA -- After millions of years on earth, a species of frog is now down to one. The only "Rabbs fringe-limbed tree frog" from Panama lives in the Atlanta Botanical Garden. This solitary amphibian calls Midtown home. He is called "Toughie" and is a lively and feisty little male. The frog is not for public display as it would be too stressful for the animal. But the public can see him in the July edition of National Geographic Magazine. He may be alone, but he is not being left alone. Frogs inhabit the Atlanta Botanical Garden benches as pieces of art. "We don't know how old he is -- he was brought in as an adult, said Dr. Jenny Cruse-Sanders, Vice President of Science and Conservation. And frogs inhabit a pod in the corner of the facility right off Piedmont Road. "It is very sad actually to have the last of a species. It's a position no conversation organization wants to be in," Cruse-Sanders said. "The last time they detected this f
Post a Comment
Read more 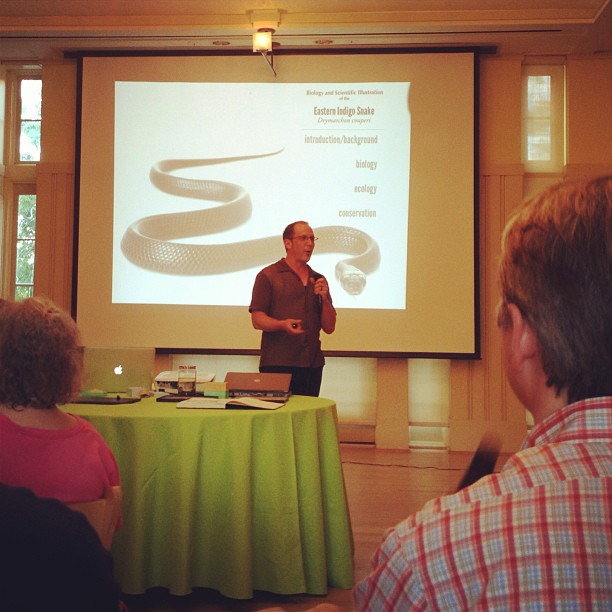 A friend of mine (Jay Patton) snapped this photo at the beginning of the talk. On the table in front of me is a collection of specimens (skeletal and alcoholic) that I have used for illustration including this Indigo Snake book. On July 18th, I had the privilege of discussing the biology and illustration of the Eastern Indigo Snake ( Drymarchon couperi ) . This is a book, authored by Chris Jenkins of the Orianne Society, that I have been illustrating for the past few months and will most likely be published next year. Illustrating this book has givien me the rare opportunity to become intimate with indigo snake biology, ecology and conservation and I had an incredible experience sharing this information with the Science Café here at the Garden.  For more information, click below: http://www.meetup.com/AtlantaScienceTavern/events/128587622/
Post a Comment
Read more

2014 Designated YEAR OF THE SALAMANDER

An audio supplement to the comprehensive book 'Amphibians and Reptiles of Georgia' ...
Post a Comment
Read more
More posts