Showing posts from March, 2019
Show all

Here is the graphic 'in situ' at the conference! It's rather exciting to see it up on the big screen :) What an amazing conference (as always). I am honored to serve on the Steering Committee. #SEPARC #SEPARC2019

I haven't been on social media for a while — Feb-April is turning out to be the crazy time of year for us at the Amphibian Foundation.⁣ ⁣ Field research, conferences and the Atlanta Science Festival all happening at once. A lot of coffee makes it possible.⁣ ⁣ (1) Starting with SEPARC in Feb, which also marked the 9th year in a row I had the privilege of drawing the conference graphic.⁣ ⁣ This year, an Eastern Box Turtle!⁣ ⁣ #SEPARC #SEPARC2019 #Terrapene #Turtle #BoxTurtle

- March 08, 2019
Recently, Erin Cork of UGA and colleagues recorded this wonderful video which captures the lovely snoring calls of Georgia's rarest frog — The Gopher Frog ( Lithobates capito ) . There are at least 2 other species of frog in the background as well — can you tell what they are?? Survey frequencies and scope have increased this year in response to the continued decline of the species throughout the state. Sandhills WMA for example, is one of the source ponds of eggs for the now decade-long Head Start program, where eggs are collected and reared past the sensitive tadpole stage and released into protected habitat as froglets. In recent years, however, detections have declined, and this is the main reason that the Amphibian Foundation, in partnership with Zoo Atlanta, GA DNR, UGA and USFWS have begun establishing a captive propagation program. If we can produce healthy baby Gopher Frogs at the Foundation, then we don't have to rely on wild collected eggs for the conserva
Post a Comment
Read more

Status Update: the Atlantic clade of the Frosted Flatwoods Salamander 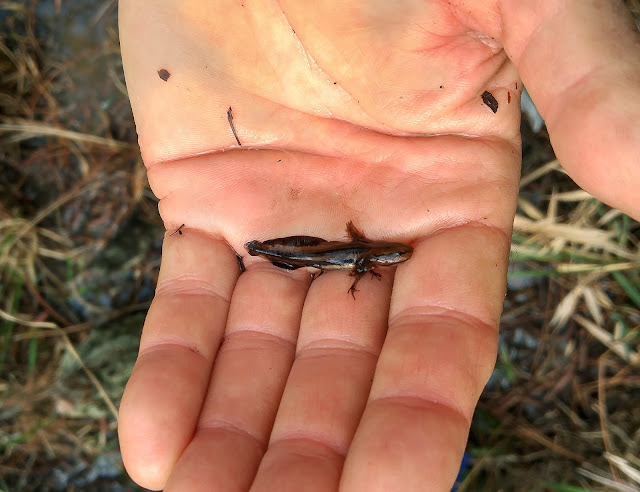