Showing posts from May, 2012
Show all

- May 27, 2012
A larval Reticulated flatwoods salamander | Ambystoma bishopi reaching metamorphosis Some of the Reticulated flatwoods salamanders have begun metamorphosing! As their gills and tail fins resorb to reveal their terrestrial adult condition, the distinctive lateral stripes present on the larvae fade and is replaced with a metallic grey wash color, that at times appears blue. Dante was able to get these amazing shots of our first metamorphs Hints of blue with the grey
Post a Comment
Read more

A New Frog on Exhibit: The Mimic Poison Frog 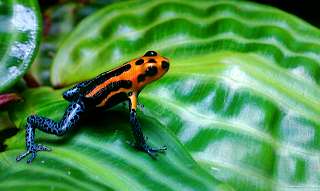 The Mimic Poison Frog | Ranitomeya imitator on exhibit in the Frogs of the Amazon display Easily one of the smallest frogs we have on exhibit, The Mimic poison frog is called a 'thumbnail' species due to its diminutive size. These frogs are not shy, and I have been able to spot 2-3 of the five at most times throughout the day. They are a very active species, and were dazzling interested visitors all day as they were getting to know the exhibit and staking out territories. At least, that's how it seemed to me. Ranitomeya imitator | Mimic poison frog (right forefront),    Cruziohyla craspedopus | Fringed leaf frog (left, back)
Post a Comment
Read more 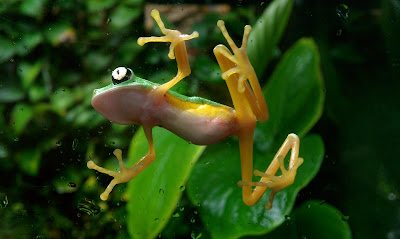 Lemur leaf frog | Agalychnis lemur . Occasionally, we are lucky enough to see one out during the day. Here is one stuck to the glass of our Costa Rica exhibit
Post a Comment
Read more 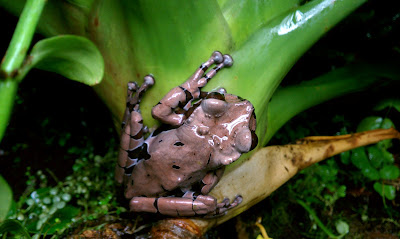 Anotheca spinosa | Crowned tree frog on display in the Frogs of Panama exhibit.   Anotheca spinosa , the Crowned tree frog is one of the species originally collected in Panama by Garden and Zoo Atlanta staff in 2005, when Panamanian amphibian species were being threatened by a fungal outbreak in the region. This fungus, Bd or ' chytrid ' ultimately did inoculate the area causing widespread frog death across many species. Chytrid inhibits the animal's ability to respire. There is only one frog with huge fingers like that in the Panama exhibit — Anotheca Today in the frogPOD ... Original Panamanian Crowned tree frogs in amplexus, with eggs deposited along the inside of their 'tree hole' just above the water
Post a Comment
Read more
More posts